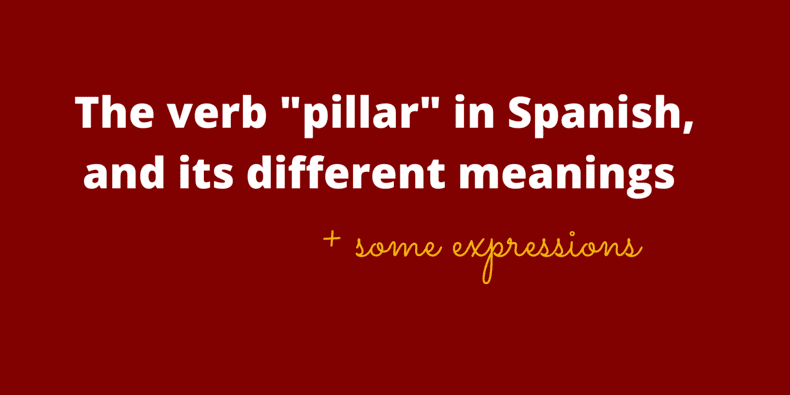 The verb “pillar” is other of (many) Spanish verbs that has multiple meanings, in today’s blog I am going to teach you some of them. And also, I will comment some expressions with this verb, “pillar”, because as you have probably guess, are quite common too. 1-Alcanzar–to reach/ atrapar–to catch Normally something that is moving. El ladrón echo a correr y la policía no lo pudo pillar-the thief started to run and the police could not catch him. In this meaning I would like to mention the game for kids “pillar” that is “tag” when someone runs trying to catch the rest. It is also very popular to follow a kid around saying “que te pillo, que te pillo” – I am going to catch you, I am going to catch you. And once we have them, we say “te pillé” –I caught you. We also use it when we call someone and we want to make sure it is the right time to reach (find) them, for example I can call a friend and ask. ¿Te pillo en un buen momento? –  Is this a good moment? And she could reply Me pillas super ocupada, te llamo luego. – I am very busy, I will phone you later. 2-sorprender en el acto-to catch someone in the act / descubrir-to find out Pillaron a Juan robando en la panadería-Juan was caught stealing in the bakery. A Carla la pillaron copiando en el examen de matemáticas-They caught Carla copying in the maths exam. We can also use it for just sorprender/to surprise. La noticia me pillo por sorpresa, no estaba preparada– The news surprised me, I was not ready. 3-contagiarse – to catch/to become infected El fin de semana pasado pillé un resfriado y no pude ir al cumpleaños de Miguel-Last weekend I caught a cold, and I could not go to Miguel’s birthday. 4-entender-to understand If someone tells us a joke and we don’t see the funny thing we can say No lo pillo-I don’t get it 5-coger-to get If you are about to jump in the bus and your mother call you you can say Estoy a punto de pillar el bus, te llamo enseguida-I am about to get the bus, I will call you soon. Or No tengo planes para esta noche, así que creo que voy a pillar una pizza y ver una peli-I don’t have plans for tonight, so I think I am going to get a pizza and watch a movie. 6-atropellar-to run over/to hit El otro día Juan pilló a un ciervo con su coche-Juan ran over a deer with his car the other day. Now, I want to see some expressions that use the verb “pillar”, but first I would like to explain the verb pillar as reflexive, pillarse. -pillarse means to fall for someone Carlos estás muy pillado por Marta, le envia flores cada semana-Carlos has totally fallen  for Marta, he sends her flowers every week. -pillar el toro-to run out of time Vístete, que tenemos que llegar al cine en 20 minutos, nos va a pillar el toro.- Get dressed, we need to get to the cinema in 20 minutes, we are going to run of time. -pillar de camino-to be on one’s way No te preocupes, yo recojo la tarta, la tienda me pilla de camino-Don’t worry I will pick up the cake, the shop is on my way. -pillar con las manos en la masa-to be caught with the hand in the cookie jar. Lo pillaron con las manos en la masa-they caught hime read handed. The caught him exactly when he was doing something. It is similar to number 2, to be catch in the act, but this one is more literal. That is it! The verb pillar, some of its meaning and some expressions. Now, remember, that if you want to listen to this lesson in Spanish, you can watch it on my YouTube channel here: And before you leave don’t forget to write a comment and let me know -if you know any other meanings or expressions with pillar, -and write a sentence with one of the meanings of the verb pillar we have seen today. Have a great day! And I will see you next time! Blanca-x

If you enjoy my content you can support me by buying me a coffee.

A little bit of the Spanish subjunctive – markers

Spanish phrases with the verb “echar” 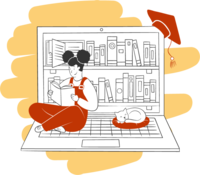 The best way to practise your Spanish in an entertaining way. 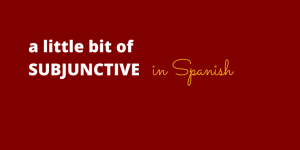 A little bit of the Spanish subjunctive – markers

When Spanish students hear subjunctive they go into a panic mood, but today I am here to give you a 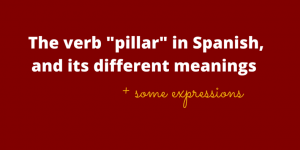 The verb “pillar” and its meanings plus some expressions

The verb “pillar” is other of (many) Spanish verbs that has multiple meanings, in today’s blog I am going to 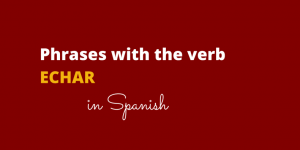 Spanish phrases with the verb “echar”

You can find out more about which cookies we are using or switch them off in settings.

This website uses cookies so that we can provide you with the best user experience possible. Cookie information is stored in your browser and performs functions such as recognising you when you return to our website and helping our team to understand which sections of the website you find most interesting and useful.

Strictly Necessary Cookie should be enabled at all times so that we can save your preferences for cookie settings.

If you disable this cookie, we will not be able to save your preferences. This means that every time you visit this website you will need to enable or disable cookies again.